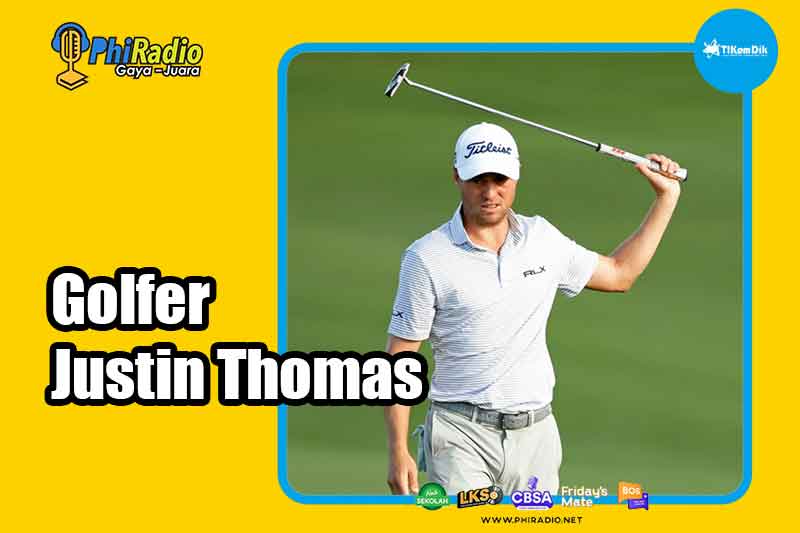 Golfer Justin Thomas. Justin Louis Thomas (born April 29, 1993) is an American professional golfer who plays on the PGA Tour and is former World Number One. In 2017, Thomas experienced a breakout year, winning five PGA Tour events, including the PGA Championship, his maiden major championship, and also winning the FedEx Cup championship. In May 2018, Thomas became the 21st player to top the Official World Golf Ranking.

Thomas turned professional in 2013 and earned his tour card on the Web.com Tour through qualifying school. He won his first professional event at the 2014 Nationwide Children’s Hospital Championship.[8] Thomas finished fifth in the 2014 Web.com Tour regular season, and third after the Web.com Tour Finals, and earned his PGA Tour card for the 2015 season. In 2015, Thomas collected seven top-10s and 15 top-25s, with fourth-place finishes at the Quicken Loans National and Sanderson Farms Championship as his best results. He finished 32nd at the PGA Tour’s FedEx Cup, losing the Rookie of the Year award to Daniel Berger.

On November 1, 2015, Thomas earned his first victory on the PGA Tour by winning the CIMB Classic in Kuala Lumpur, Malaysia, by a single stroke over Adam Scott. He overcame a double bogey on the 14th hole during the final round and holed a six-foot (1.8 m) par putt to claim the win by a stroke. Thomas had earlier shot a course-record 61 during the second round to contribute to a 26-under-par winning score

On October 20, 2019, Thomas won the CJ Cup in South Korea. This was his second win of the tournament in its three-year existence.[22]
In December 2019, Thomas played on the U.S. team at the 2019 Presidents Cup at Royal Melbourne Golf Club in Australia. The U.S. team won 16–14. Thomas went 3–1–1 and lost his Sunday singles match against Cameron Smith.[23]

On January 5, 2020, Thomas won the Sentry Tournament of Champions at Kapalua Resort in Maui, Hawaii for the second time. Thomas won in a playoff over Xander Schauffele and Patrick Reed.[24]

On August 2, 2020, Golfer Justin Thomas won the WGC-FedEx St. Jude Invitational at TPC Southwind in Tennessee by three strokes over four other players. This was the second time that Thomas had won the event and his 13th career victory on the PGA Tour. He came from four strokes behind overnight leader Brendon Todd to prevail on the final day. The win took Thomas to Number One in the Official World Golf Ranking for the second time in his career